It was a more than interesting week. Not much mattered until Jerome Powell (the U.S. Federal Reserve Chair) delivered comments on Friday. He came clean. Or at least he helped to reverse the delusion created by stock market enthusiasts that the Fed would ‘pivot’ and reverse course on the market-unfriendly series of rate hikes. Rates are going higher and they will stay higher. There will be some pain for consumers and business. Inflation must be crushed. They will do what it takes. The Fed pivot turned into a divot. The markets were not happy with the reality check.

The futures, bond, and currency markets are already telling the world that there is no dovish pivot, and quite frankly, there probably never was a dovish pivot. The only market out there that hasn’t gotten the message appears to be the equity market.

If Powell can deliver a message that even a golden retriever (I own two goldens) can understand, then the equity markets’ day of reckoning will arrive in short order.

The futures knew it, bonds knew it, and the dollar knew it. Once again, the only market living on an alternate planet was equities …

In his Jackson Hole speech, in the opening paragraph, he made it clear that his remarks would be shorter and the message would be more direct. That it was.

Very simply, rates still have further to rise, and once there, they will stay there for some time. In the following paragraphs, I have borrowed from Michael and others, I will avoid quotes for readability. My own commentary is in the mix.

Powell offered that reaching an estimate of the longer-run neutral rate is not a place to pause or stop. He said the June FOMC projections suggest rates would rise to just below 4% through the end of 2023 and that history warned against loosening policy too soon.

It’s evident that the Fed is aware of the mistakes made in the 1970s and 1980s with the stop-and-go monetary policy approach that led to even higher rates, and the Fed appears determined not to repeat those mistakes. There can be no 70’s show rerun.

Powell noted that fighting inflation will take a sustained period of below-trend growth and a softening labor market, which could bring pain to households, and are the costs of reducing inflation. In the third paragraph of his speech, it’s right there. The Fed is willing to sacrifice growth and face rising unemployment to bring inflation down. He is telling the market there will be no “pivot” anytime soon.

Inflation is driving the bus

“Our aim is to avoid that outcome by acting with resolve now,” Powell said.

The following image is not a live video, but an example of the headlines that ‘spooked’ the markets. 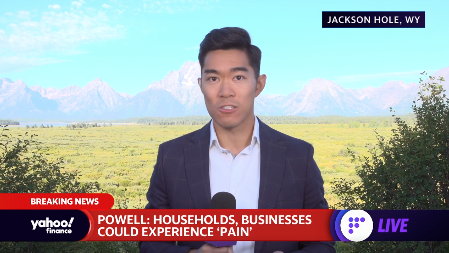 Federal Reserve Chairman Jerome Powell on Friday said the central bank’s job on lowering inflation is not done, suggesting that the Fed will continue to aggressively raise interest rates to cool the economy.

Get the inflation-killing job done

“We will keep at it until we are confident the job is done,” Powell said in remarks delivered at the Fed’s annual conference in Jackson Hole, Wyoming.

“While the lower inflation readings for July are welcome, a single month’s improvement falls far short of what the Committee will need to see before we are confident that inflation is moving down,” Powell said Friday.

The central bank has delivered four consecutive interest rate hikes over the last six months, moving in June and July to raise rates by 0.75%, the Fed’s largest moves since 1994. By raising borrowing costs, the Fed hopes to dampen demand by making home buying, business loans, and other types of credit more expensive.

Powell said more rate hikes will be needed, with “another unusually large” increase still on the table for the Fed’s next meeting in September. The Fed chair reiterated that “at some point,” the Fed will move to slow the pace of its price increases.

In current circumstances, with inflation running far above 2 percent and the labor market extremely tight, estimates of longer-run neutral are not a place to stop or pause.

“Our aim is to avoid that outcome by acting with resolve now,” Powell said.

Combined with the crunch of expensive credit, Powell warned households and businesses may feel some pain as interest rates increases continue. Powell …

These are the unfortunate costs of reducing inflation. But a failure to restore price stability would mean far greater pain.

Lessons from that 70’s show

That commentary, pointing to the lessons officials learned from studying the Fed’s struggle to combat high inflation in the 1970s and 1980s. As I have written for quite some time, central bankers have to kill inflation ‘real good’ the first time. There’s no playing around with the threat of stagflation. Let’s take our lumps now.

They have to smack the consumer, real hard. The Fed is using a blunt instrument to fight inflation. They can only go at the demand side of the equation.

The Volcker pivot to divot

Here’s a history lesson on the actions of the Fed chair during the period of stagflation of the 70’s and early 80’s.

From August ’79 through April 1980, Volcker raised interest rates from around 11% to 17.5%. Inflation over this period rose from 11.8% to 14.5%. A pause in inflation pressures in the summer of 1980 prompted Volcker to make an error — the Fed slashed interest rates. By July 1980, benchmark rates were below at 9%, the lowest in two years. Inflation was trending down but still running north of 12%. Another rate-hiking cycle began.

He then went on raise rates significantly, and eventually put a R.I.P. stagflation note on the gravestone. In the chart below, the grey areas represent recessions.

An ‘early ease up’ is a mistake that Powell is looking to avoid.

Inflation data on Friday morning showed prices in the U.S. rose by 6.3% on a year-over-year basis in July, a notch down from the 6.8% pace measured in June. When stripping out food and energy, the Personal Consumption Expenditures Index showed prices rising by 4.6% compared to a year ago — still well above the Fed’s target of 2%.

Who can ignore all of the above?

It’s all good financial press fun that the investor in the accumulation stage can ignore. You can carry on, add monies on a regular schedule. Stick to your investment plan. Pay attention to valuation not the noise and confusion.

You can just watch it all – for entertainment purposes only. And it is entertaining if you like geeky economic and market ‘stuff’.

If you’re in the retirement stage, you should already be prepared for all of the uncertainties. You might be ready with a version of an all-weather portfolio.

You will earn a break on fees by way of many of these partnership links.

Cut the Crap Investing readers can earn a break on fees at Questrade by way of that partnership link. At Questrade, you can buy ETFs for free.

I have partnerships with several of the leading Canadian Robo Advisors such as Justwealth, BMO Smartfolio ,Wealthsimple, Nest Wealth and Questwealth from Questrade.

Consider Justwealth for RESP accounts. That is THE option in Canada with target date funds that adjust the risk level as the student approaches the College or University start date.

The self-directed investor might consider the service provided by Mark Seed from My Own Advisor. He runs Cashflows & Portfolios where they will provide options for that optimal retirement funding strategy. That service is provided for a very reasonable fee.

If you do head to Cashflow & Portfolios, be sure to tell them Cut The Crap Investing sent ya 🙂

Make your cash work a lot harder at EQ Bank. RRSP and TFSA account savings rates are at 1.65%. You’ll find some higher rates on GICs, recently updated and increased t0 3-4%. They also offer U.S. dollar accounts. We use EQ Bank, they have been awesome.

We make between $60 to $70 every month! And that’s on everyday spending. There are no fees with …

The Tangerine Cash Back Credit Card

Last month we received $75 in cashback cash. We are spending too much, ha.

While I do not accept monies for feature blog posts please click here on the mission and ‘how I might get paid’ disclosures. Affiliate partnerships help me pay the bills for this site. That will allow me to keep this site free of ads and easy to read.

@Garnet_2203 @LoblawsON @CTVNews @atRachelGilmore @ColinDMello @TorontoStar @mini_bubbly Hey did you know you were called out (by an actual expert from Dalhousie) for not knowing what you are talking about? Do your research, please. 😊🇨🇦https://twitter.com/FoodProfessor/status/1599727446579769345

Most silly thing I've heard in a while. Another conspiracy theory. Grocers make more money selling privately labelled products, even with a price freeze. https://twitter.com/Garnet_2203/status/1599219602226978816

Would like to see this one answered. What's up with the crypto exchange, where many Canadians are exposed by way of the ETFs ...

Hey @Wealthsimple, can you reassure Canadian investors that their #Crypto assets are safe on your platforms given the concerns around your custodial partner Gemini? 🙏

The Sunday Reads was very well read. Canadians love their bank stocks and dividends. Thanks to Dan @StockTrades_CA for help on the Canadian bank reporting.
https://cutthecrapinvesting.com/2022/12/04/its-the-big-canadian-bank-week-on-the-sunday-reads/